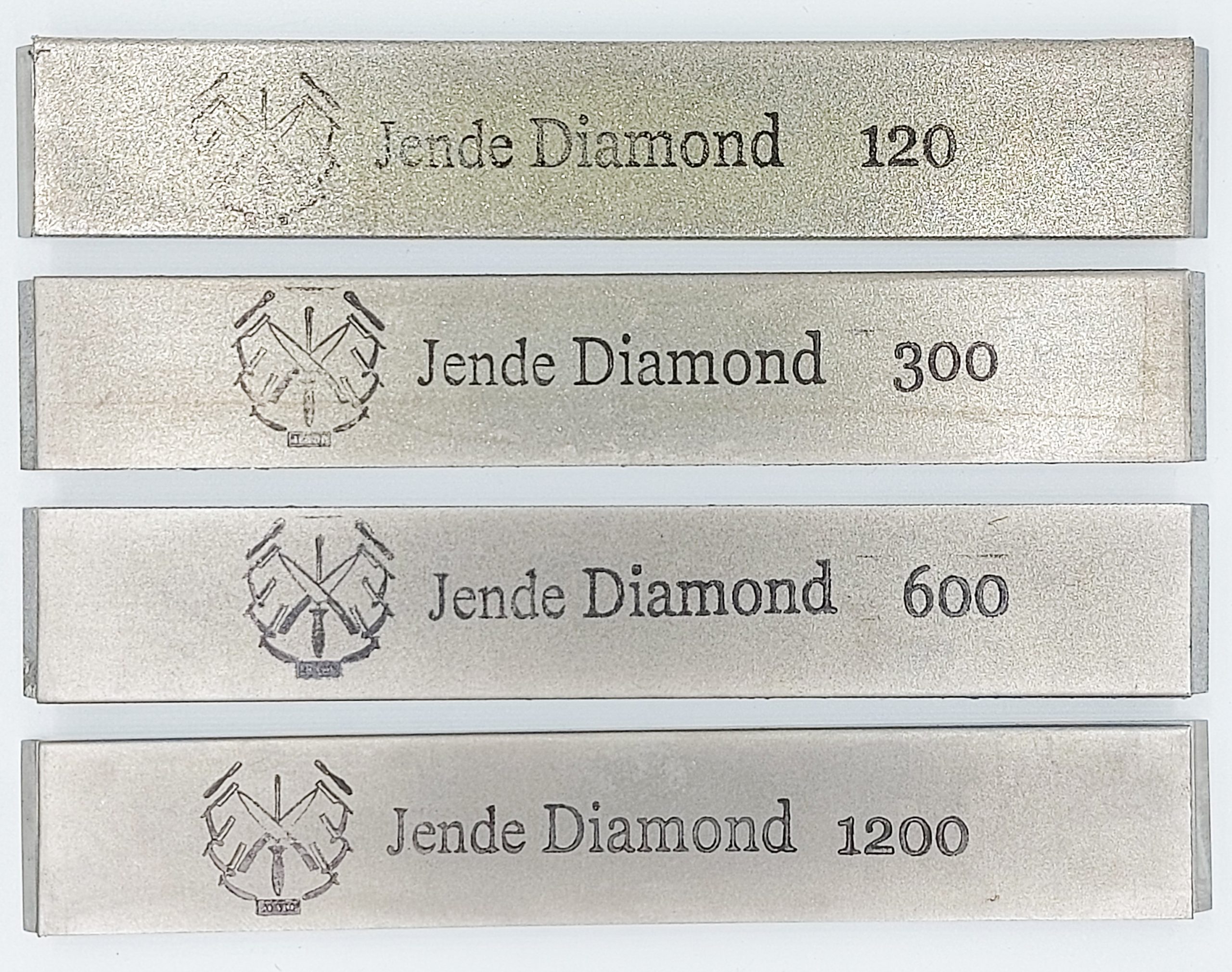 Jende Industries has released five grits of 1×6 inch diamond sharpening stone plates grits that can be used with the Jende JIGS for Knives, Hapstone, TSProf, and Edge Pro guided sharpening systems. Available in 80, 120, 300, 600, and 1,200 grits, these diamond plates are electroplated to the highest standard and are designed to withstand the rigors of repairing, profiling, sharpening, and maintaining knives, razors, chisels scissors and planes.

What makes these diamond plates different from the others? First is the high quality electroplating. The electroplating on the Jende plates securely fuses the diamonds to the plates, and will not become dislodged by a knife tips, chisel corners, or through regular use. Second is the diamond density. From the picture of the 120 grit below, it is clear that there’s a very high concentration of abrasive. This means each pass you make while sharpening will abrade with speed and consistency at every grit, and take a much longer time to wear down.

What is each grit used for? Although it is mostly self evident, there are some more specifics to it. For example, the 120 grit diamond plate is usually the first grit, and the most used lowest grit diamond plate in a sharpening progression. The 80 grit diamond plate is really aggressive – almost too aggressive sometimes – and is best reserved for the most difficult repair and profiling tasks. The 120 is better suited for most rougher work because it is usually aggressive enough, and is easier to clean up on subsequent grits than the 80 grit. But if there is some metal hogging that needs to be done, the 80 is there as an alternative option.

The 300 grit diamond plate is mainly used to clean up the 120 grit scratches and can also be used for routine maintenance and even lighter repairs and profiling. This grit is important in an all-diamond progression as a cleanup step because it will help set the stage for a more perfect bevel and shiny Instagram mirror edge later.

The 600 grit diamond plate is another transition step in an all-diamond progression between the 300 and 1,200 grits. It’s real claim to fame is that it leaves the first basic working edge sharpness. It is still aggressive enough to be used as a touching up and maintenance grit on an already sharpened edge.

The 1,200 grit diamond plate is the final diamond plate grit which leaves a very good basic working sharp edge for just about any cutting task. It is still aggressive enough to to routine maintenance and touching up. Most importantly, it establishes a really good foundation to work forward from if you continue with diamond resin stones, diamond films, or water stones.

All grits of the Jende diamond sharpening stone plates feature a 3mm thick electroplated abrasive plate on 3mm of acrylic. This is glued to a standard 1×6 inch blank. The diamonds can be used with water, oil or dry. We recommend water to keep the plates clean of debris and more aggressive. Air dry between use.