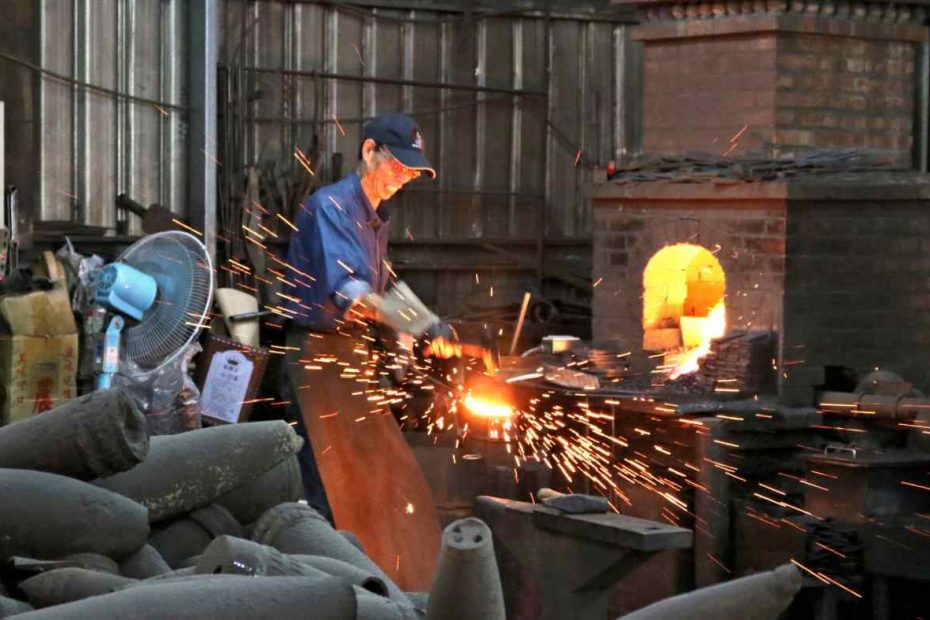 This is the first of a series of posts about my (Jende Industries) relationship with Maestro Wu knives since 2005. I’ve been very lucky to get to know Maestro Wu over the years not just as a customer, but also as a knife person. Maestro Wu offers a series of knives including the more traditional kitchen cutlery D and MA series in regular bombshell steel, the A-series Damascus Bombshell Steel, as well as a traditional G-Series Bombshell Steel Fish and Butchering knives.

Picture it: 1937, Kinmen Island. This historically Chinese island has been under Japanese rule since it was ceded at the end of the First Sino-Japanese War in 1895. Wu Chao-Hsi inherits his father’s cutlery business and establishes the Chin Ho Li knife factory. This same year sees the start of the Second Sino-Japanese War – which is also regarded as the beginning of WWII in Asia. As Mainland China is only about 3 miles away from Kinmen, the war is very close and there’s a shortage of steel and other raw materials. Mr. Wu scavenges the beaches for shrapnel and goes from village to village with a small forge strapped to his back. The Maestro Wu name is born.

Fast forward to August 1958. Kinmen is now part of Taiwan as a Democratic Chinese country, and sits perilously close to Communist Mainland China. The Second Taiwan Straight Crisis begins. The heavily fortified Kinmen island withstands the artillery bombardment from the Chinese PLA until the communists literally run out of roughly 400,000 bullets. Not being able to admit defeat, China would fire unexploded shells every other day filled with propaganda leaflets for the next 20 years. It is estimated that over 1 million shells were fired in that time. This solidifies the marriage between Maestro Wu and the Kinmen Knife made from Bombshell Steel.

From 1958 until 1994, Kinmen remains on high military alert and heavily supplied with soldiers from Taiwan. These soldiers inevitably bring Maestro Wu Bombshell Steel Knives back home as gifts and mementos of their service. The history and quality of the knives makes them treasured family items in many homes. The Maestro Wu legend is fully forged.

Fast forward one last time to 2005, when some young kid who started Jende Industries gets interested in knives and sharpening while in Taiwan and hears about these almost mythical knives made from bombshells. Someone from everyone’s family seems to have one, but they are still highly coveted and hard to get a hold of. Then he finds out there will be a Kinmen exhibition in his city and Maestro Wu Tseng-Dong would be there, and so would the knives.

This was the beginning.