Home » Blog » On Thinning and Sharpening a Knife

On Thinning and Sharpening a Knife 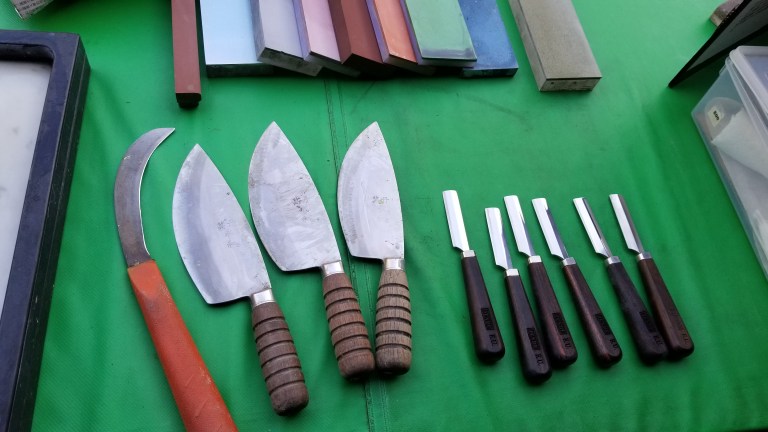 So it’s Christmas at a local market, and we are doing some sharpening! We were given 3 matching Asian cleavers/ fish knives to sharpen and we noticed some of the previous sharpeners’ work and decided to discuss it a little.

In Taiwan, many sharpeners use stone wheels or sandpaper flap wheels. While the knives usually do get arguably sharp, the overall sharpness and aesthetics can be a real roll of the dice. On this particular knife, the stone wheel got a little off track and caused some interesting lines. You can also see the rather long and deep scratches caused by the flap wheels. Our initial bevel was very thin, and we decided to clean up the mess a little by “thinning” the blade, holding it about 1/4″ from flat on the belt grinder 120 grit. That produced about 5mm or 1/4″ bevel, but far short of the 1″ of the grind marks from the stone wheels and sandpaper flap wheels.

One of the discussion points is that people always think you need to thin the blade out so much, but in reality, it doesn’t need that much overall usually. Second, with this particular knife, it is laminated steel, meaning there is a sandwich of an outer steel clad to a core steel. The cladding on these laminated steels is often very soft stainless while the inner core is of a high carbon steel. When thinning out the stainless clad steel, it can gum up the stones and belts while sharpening. Also, removing the cladding so far behind the core steel can reduce the stability of the edge, so removing too much of it is not a good thing. In the end, we would like to know what you think about thinning in this way. Please let us know!

Jende Industries is an international company that specializes in sharpening and sharpening gear. We are the makers of Jende Reed knives, Jende Nanocloth Strops, Jende Diamond Emulsions and Jende Leather Knife Rolls. We are also suppliers of custom cut stones for guided sharpening systems such as the Jende JIGS for Knives, Hapstone, Edge Pro, TSProf, KME sharpener, and Wicked Edge. So if you are a musician, chef, outdoorsman, or sharpener of any level, Jende has something for you! Check out our official Jende Industries youtube channel for more descriptions and performances of all our sharpening products and services.